After my wedding this past October, I finally resumed my genealogy research, albeit not with the same energy at first. I’ve hit some brick walls with the Polish genealogy research, but my aunt mentioned something interesting, that our Polish family surname Menet was actually French in origin. She wanted to know why our Polish ancestors possessed a French surname (and as I learned a bit about the importance of focusing with a research question, this is my first one). I decided to just throw the surname into a Google search and see what came up. I can’t even recall the trail that I followed on the Web, but it led me to a small village in France called Menet, and I wonder if our Polish ancestors came from that village, which dates to at least the 12th century: 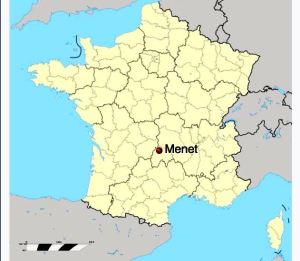 Owing to my Polish brick wall (in that I could only trace the Menet line back to the late 18th century in Poland), I have no idea of their French connection. My aunt also had a DNA test, which indicated that she has *possible* French ancestry. (More preliminary research revealed that Menet is a Huguenot surname, but I know nothing about that history.)

When I hit that brick wall, I had turned to my father’s side of the family, which I was told was mostly English and Welsh (with some French Canadian added into the mix). My paternal grandmother’s maiden name was Disney, and I also discovered the French origins of that name! (So I may have French ancestry on both sides.) My Dad’s family tree has been easier to trace, and I discovered what I consider a fascinating history:

When I looked at an ancestor from the 16th century, Richard D’Isney, MP for Grantham, JP for Kesteven, High Sheriff of Lincoln, I discovered that he was born and died in Norton Disney, Lincolnshire, England, and according to Wikipedia:

“Norton Disney is a small village and civil parish on the western boundary of the North Kesteven district of Lincolnshire, England. The population of the civil parish at the 2011 census was 226. Norton Disney is the seat of the Disney family, the name an Anglicised version of the original French surname d’Isigny, of Isigny-sur-Mer, Normandy, from whom film producer Walt Disney’s family might be descended.” (Source: https://en.wikipedia.org/wiki/Norton_Disney) And yes, I found that Walt Disney on our family tree, but I already knew that we were related from family stories.

“The d’Isigny family traces back to before the Norman conquest of England, and William The Conqueror (1028–82) had military commanders named d’Isigny. In 1924 Isigny was renamed Isigny-sur-Mer. … The Disney surname is derived from the town.[2] The earliest known ancestor of Walt Disney, with a similar name, was Jean-Christophe d’Isigny (“of Isigny”), the branch settled in what is today called Norton Disney in England.” (Source: https://en.wikipedia.org/wiki/Isigny-sur-Mer)

So, there you have it. I may have discovered French ancestry on both my maternal and paternal family trees. I love learning new things in this genealogical journey! I think a trip to France is in my future; I would love to visit these ancestral villages — both Menet, France and Isigny-sur-Mer, France (not to mention Norton Disney, only about 3 hours’ drive from London).

I'm a librarian and amateur historian who runs a women's memoir book club. I'm working on a memoir project about my own family. View all posts by polishamericangirl